A Step-by-Step Guide to Interview Transcripts

A Step-by-Step Guide to Interview Transcripts

An interview transcript is a written record of the oral content of an interview. It records who was present, where and when the interview took place, and what was discussed.

The transcript may be detailed, recording every word, or more of an overview based around the main points of the interview .

The interview transcript may be created:

The latter option can be successful where the transcript features one main speaker, but the converter may miss the nuances of human conversation or even mis-hear certain words.

Another restriction of using a computerized converter is that it can only copy what was spoken; it cannot sum up a part of a conversation or draw conclusions.

What Are Interview Transcripts Used For?

There are a range of ways that interview transcripts can prove helpful to an employer, both internally and as part of a recruitment process.

A direct, word-for-word transcript that lays out everything that was said may prove helpful where the same questions are asked to a number of interviewees, as in the questions an employer may ask candidates for a job.

A detailed interview transcript can help the employer to build a direct comparison between each candidate.

Or a transcript may be produced as, or accompanied by, a summary of what was said in an interview. This is especially useful where the transcript will be shared with a number of staff members, including those who do not need to have a detailed view of the content of the interview.

In some scenarios, it may be helpful to create both a detailed transcript for clarity, and a summarized version for easy communication.

An interview transcript documents what was discussed in a format that is easily stored, whether digitally or in paper copy. This documentation can be forwarded or retained as necessary.

It also provides written evidence of what was said at the interview. In certain circumstances, such as redundancy or a misconduct investigation, there may be a legal requirement or it may be best practice to retain a record of any meeting.

Part of a Candidate Profile

During a recruitment process, an interview transcript can be a useful element of a candidate profile, along with their CV/resume , application letter, test results, references and so on.

It improves the speed with which candidate interview performance can be assessed, allows a comparison between how a number of candidates handled the same questions and provides a reminder of pertinent information.

An interview transcript is easy to forward, whether by email or as a paper copy, and ensures a level of clarity that might be missing from a verbal account by the interviewer.

Improves Focus for the Interviewer

During an interview, the interviewer does not need to make notes, because they know that the interview is being recorded, whether by a device or another person.

This allows for an easier flow of conversation between those present and a greater level of focus in the interviewer.

Even an individual with the best memory can forget a detail from an interview.

Recording an interview and then transcribing it into an actual document removes the need to remember everything that was said.

Removes the Risk of Disagreement

Where an interview is not recorded and transcribed, there may be disagreements over exactly what was said.

This is especially the case if arrangements were agreed on at the interview, such as a job offer, a pay rise or a change to working conditions.

An interview transcript removes any doubt over what was discussed in the meeting and may act as proof of an agreement.

What Does the Candidate or Interviewee Need to Know?

There are two approaches to this issue – best practice and the legal requirements.

The best practice approach is to always inform the candidate or interviewee that the interview will be recorded.

Where there is a requirement of them, such as to speak towards a microphone in the room, speak clearly or technical requirements if the interview will take place remotely, these should always be made clear from the outset.

From a legal approach, the law on recording interviews and the storage of data will vary depending on the country.

In the US, it is advisable to check state and federal laws, specifically federal law 18 U.S. Code § 2511 on what permission is required before an interview can be recorded.

In some US states, permission from one party (the interviewer) is the only requirement whereas in other states, the interviewee must also give their permission.

How to Transcribe an Interview – Steps and Examples

Should you decide to record an interview and transcribe it into a document, there are certain factors you should consider and a number of steps to follow. 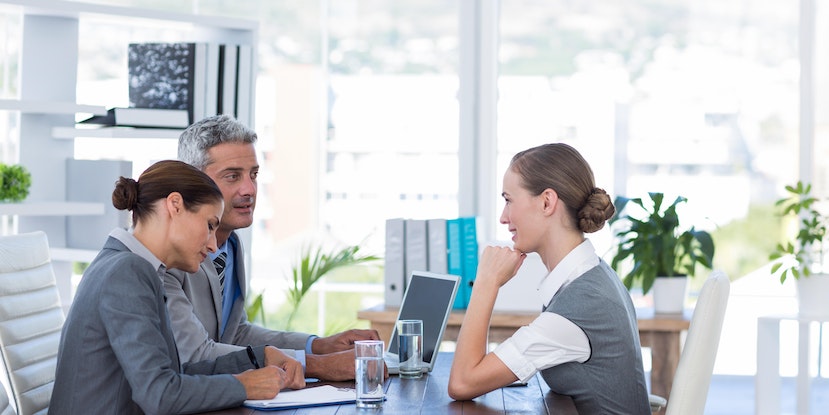 A Step-by-Step Guide To Interview Transcripts: Definition and Examples

Decide How You Will Record the Interview

The first consideration is how you will record the interview. This will first depend on whether the interview is in person, over the phone or held by video.

If the interview is in person, you may ask someone to keep written notes of what is said and also make an audio/video recording.

If the interview is held over the phone, you may use software uploaded to your mobile phone or a microphone that is attached to a recording device.

A video interview , for instance, carried out by Skype or Zoom, can be recorded using software on your computer, or whichever video-conferencing software you use.

Make sure you know exactly how you will record the interview before the day arrives, that the technical requirements are in place, and that everyone involved knows what to do.

Determine Which Format the Transcript Will Take

Do you want the transcript to be a word-for-word copy of the interview, a summarised version or somewhere in between those two?

These three formats are generally referred to as:

The format that the transcript takes will often be decided by its purpose – for instance, to compare candidate responses, to provide legal evidence or to provide a detailed summary that will be communicated to a team. The format should be decided on before the interview is held.

IN: Could you give me an example of how you used leadership skills at work?

CA: I used leadership skills at work when my manager went on maternity leave. I took the lead on two major client projects and one smaller internal project.

Listen to the Full Interview

Before you transcribe the interview, listen to the entire recording. This will:

The interview transcript should begin with the following details:

If any abbreviations will be used in the transcript, these must be stated next. For instance, in the three verbatim examples above, the abbreviation for ‘interviewer’ is IN and ‘candidate’ is CA.

These are used to signify who is speaking.

Stating the abbreviations before the text of the transcript removes any chance of confusion and ensures ease of referencing.

Use the abbreviations consistently throughout the document.

Make sure that it is clear who is speaking at any point in the transcript.

Do this by showing the name, abbreviated or not, of the speaker and adding a line break between speakers. You may also wish to state when a participant joins or leaves the discussion.

Here’s an example using the abbreviations AS for Andrew Smith, HM for Helen Montgomery, and SJ for Steve Jones:

HM: Thank you for agreeing to meet with us, Andrew.

[SJ enters the room and sits]

SJ: Sorry for being late. I’m Steve Jones, head of accountancy. The vacancy reports to me.

At no point should it be unclear who is speaking.

Use Timestamps to Indicate Unclear Sections

If there is a word or sentence that you cannot understand on listening to the recording, add a timecode with the word ‘unclear’ to signify this.

SJ: It’s not obvious in your resume, Steve. Could you clarify whether your qualification was [02:04:13 unclear].

The transcript should go through a number of stages:

Remember to save each version (first draft, first edit, following edits, finished transcript) as separate documents in case you need to refer back.

An interview transcript can form a helpful and lasting record of a meeting.

However, it does require a level of preparation and research, an understanding of how it will be used and an eye (or ear) for detail.

Virtual / Video Interview Tips: The Ultimate Guide on How to Prepare 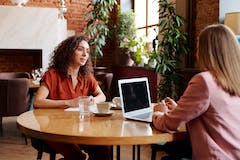