Forex (an abbreviation of foreign exchange) relates to the process of purchasing and selling different currencies within the foreign exchange market. Forex is sometimes referred to as ‘the currency market’ or ‘FX’.

In the international forex market, investors, shareholders and retailers influence the relative value for converting one currency into another by acquiring and trading currency pairs. Successful forex traders benefit from the changes in value between different international currencies by choosing two currencies and predicting which will go up in value compared with the other.

Forex charts can be used to provide an illustration of a currency’s behaviour or performance over time. Traders often use forex charts to help them to gain a better understanding of past performance; this information is then used to help them make informed trading decisions in the future.

Since forex charts can signal uptrends and downtrends in currency performance, they can be a helpful resource when it comes to planning your next trading move. 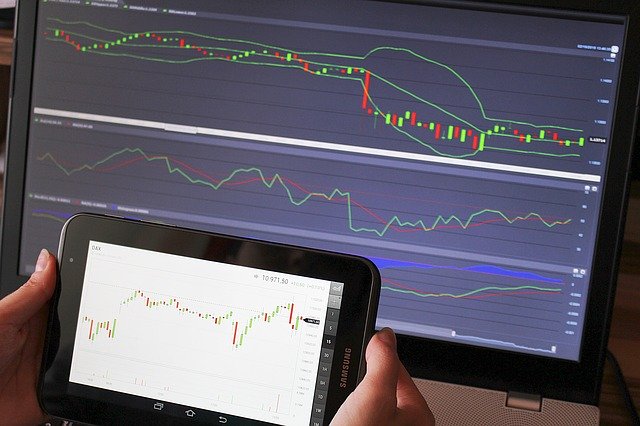 If you want to get started with forex trading, you will soon come to realise the importance of tracking currency movements. One of the most effective ways to achieve this is by using forex charting software.

There are many different options available, so it's important to look for one that will suit your skill level and trading style.

One of the most popular forex trading software solutions is TradingView. This software offers a free basic solution which can be used to trade any market. It is cloud-based, so you can access it from any device.

TradingView is designed to meet the needs of new and experienced traders alike. There are plenty of customisation options to ensure it meets your needs and you can set up alerts to prompt you when your favourite currency pairs begin to move.

If you would prefer to use an ad-free service, there are three different paid-for options which offer a range of additional benefits.

How to Read Forex Charts

Forex charts can help traders to recognise patterns, gain an understanding of how many traders are trading in a market and identify areas of support and resistance.

Choosing a timeframe is one of the most important aspects of reading forex charts. To toggle between timeframes, zoom in and out of the chart. Time is represented on the ‘x’ axis and exchange rate pricing on the ‘y’ axis. To view historical data, move to the left of the chart.

The three main charts used in forex trading are: 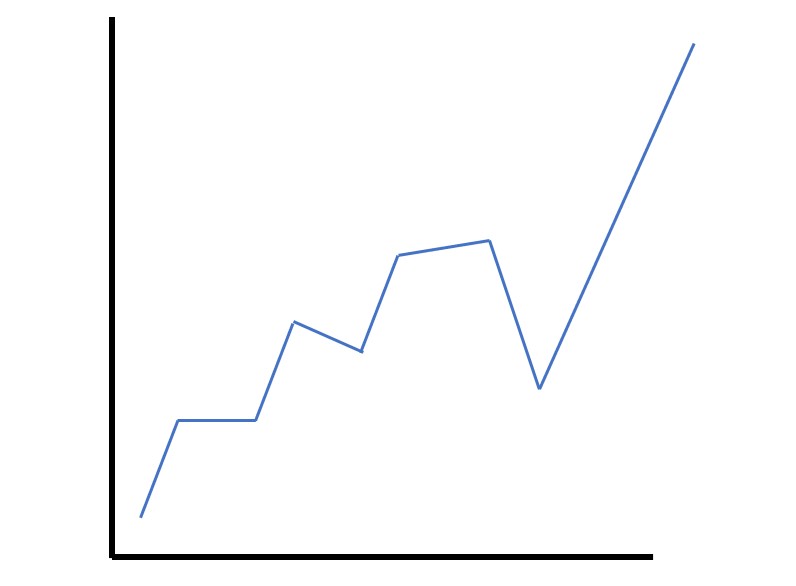 These are the most straightforward type of forex chart to read so they are a good starting point for new traders. However, they don’t give as much information as some of the other chart types.

A line chart is simply a line between one closing price to the next. It can give traders an overall feel for how a currency pair has performed during a specific timeframe. 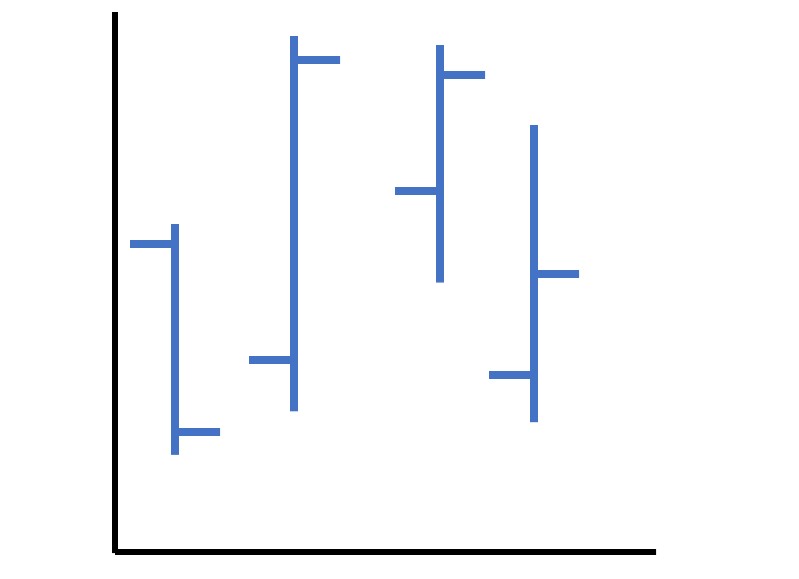 A bar forex chart gives traders a little more information than a line chart. They show closing prices but, at the same time, they also give low and high indications of opening prices. 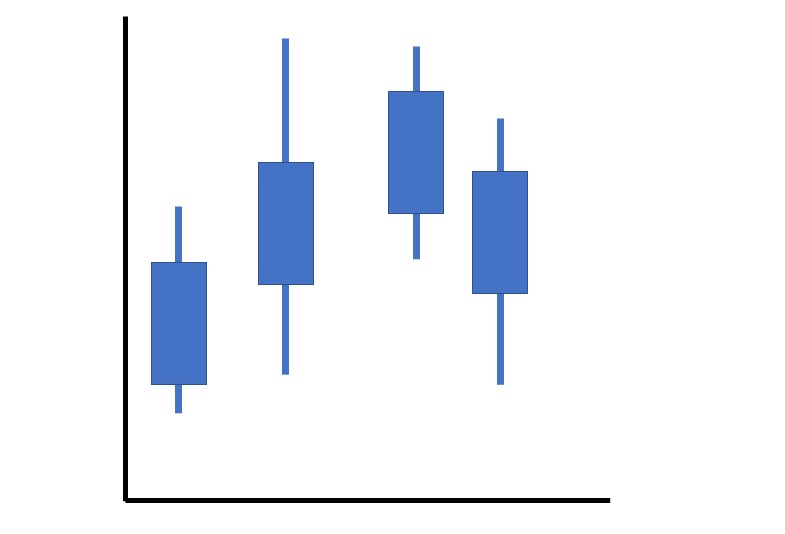 The candlestick chart has Japanese origins and is probably the most useful of the three main chart types.

When reading a candlestick chart, it is important to understand the basic candle structure. Each candlestick represents a timeframe – this could be anything from one minute to an entire week.

Irrespective of the timeframe, a candlestick symbolises the following values:

According to the opening and closing price, the candlestick can be used to decide whether a session finished ‘bearish’ or ‘bullish’:

When reading forex charts, it is important to be aware of some of the most popular forex chart patterns and trends you might observe and what they might indicate in terms of future prices. These signals include reversal and continuation trends:

During a reversal trend formation, you might spot one or more of the following patterns: 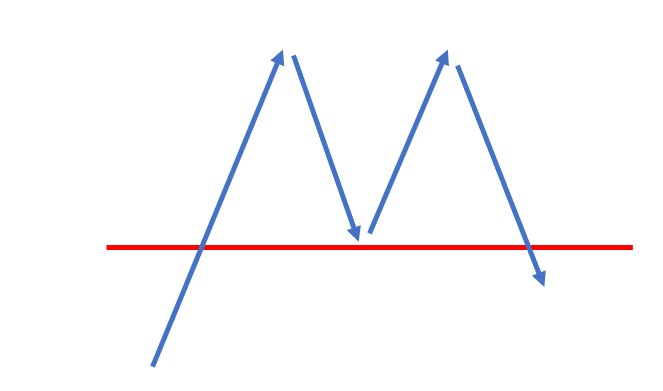 Look out for an ‘M’ shape with two ‘tops’ or peaks. Typically forming during an uptrend, a double top is a very bearish pattern which forms when the price reaches a particular level more than once but doesn’t go above it.

After this level has been reached, the price tends to dip slightly before returning back up to the top level again. If it bounces back down again, this is known as a double top. After reaching the second top, it is likely that the price will dip again. 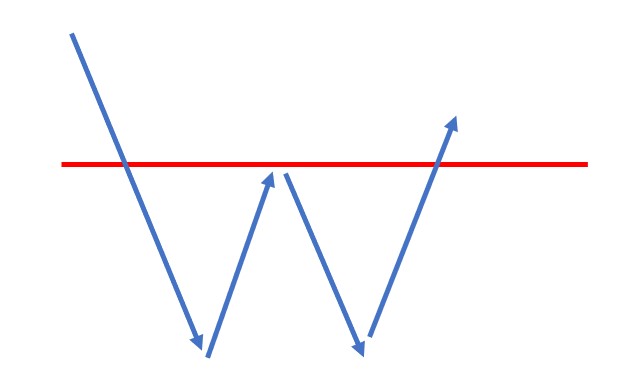 Look out for a ‘W’ shape with two low points. This bullish forex chart pattern is usually seen following a downtrend – the price will drop down to a new low, increase slightly and then dip back down to the lowest point. After reaching the second low point, it is likely that the price will increase again. 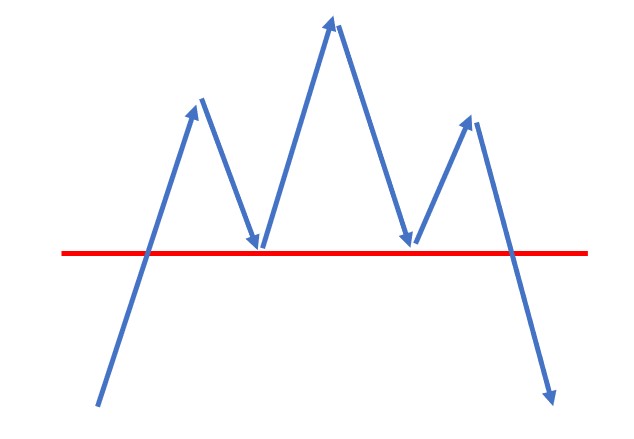 In this relatively unusual bearish pattern, you’ll see an initial peak (shoulder), a slight dip followed by an even higher peak (head), another slight dip and, finally, one further peak (shoulder). The lowest points of the two troughs can be connected to form a ‘neckline’. After the second peak, it is likely that the price will fall. 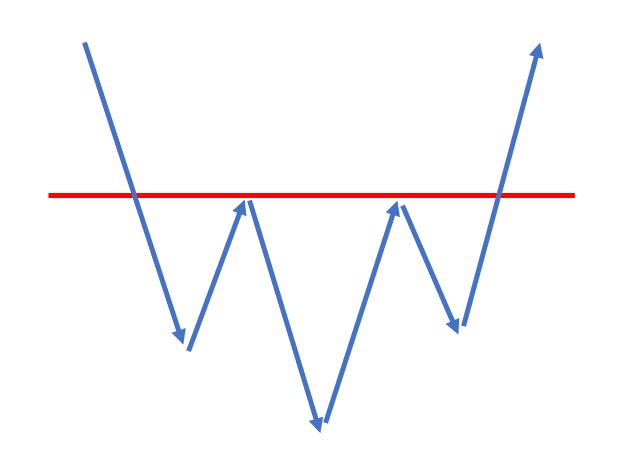 In contrast to the standard head and shoulders pattern, the inverse version is bullish. Look out for an initial dip, a slight increase followed by an even lower dip, another slight increase and finally a further dip that is not as low as the middle one. After the second dip, it is likely that the price will rise again. 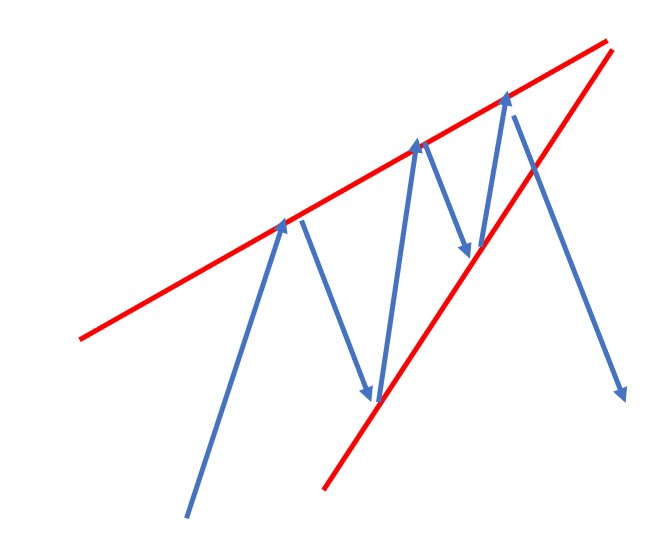 Sometimes called the ascending wedge, this bearish pattern often forms during an uptrend and can signify either a reversal or continuation trend. Look out for the price consolidating between rising sloping support and resistance lines. If this pattern shows just after an uptrend it usually indicates a reversal pattern, so you can expect the price to start dropping again.

During a continuation trend formation, you might spot one of the following patterns: 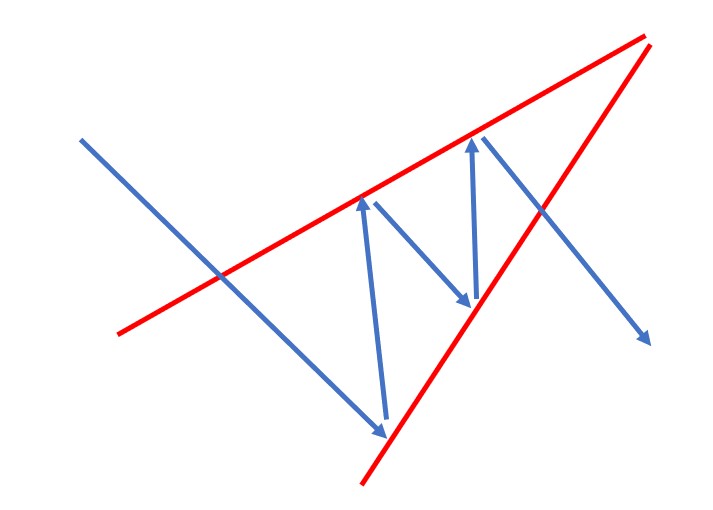 If you spot this forex chart pattern after a downtrend, it’s likely that the price will continue to drop. 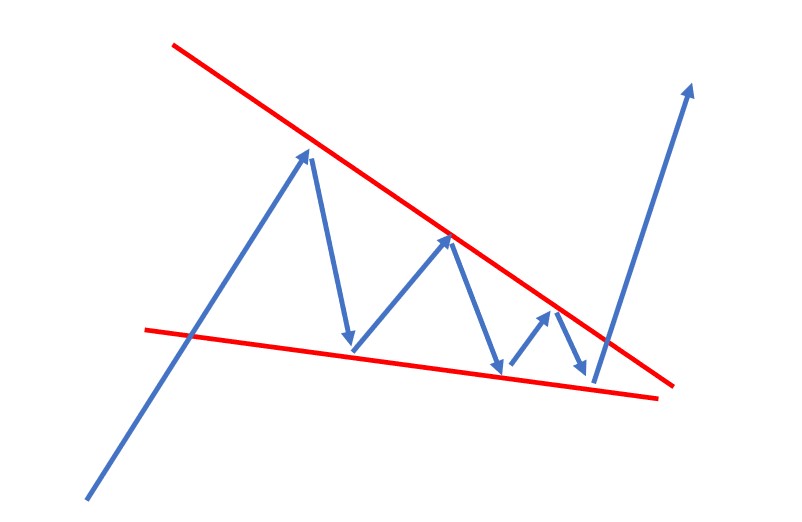 Just like the rising wedge, the falling wedge can indicate either a reversal or continuation trend. If it forms at the end of a downtrend, this bullish pattern indicates that an uptrend can be predicted. If it forms during an uptrend, the price can be expected to continue increasing. 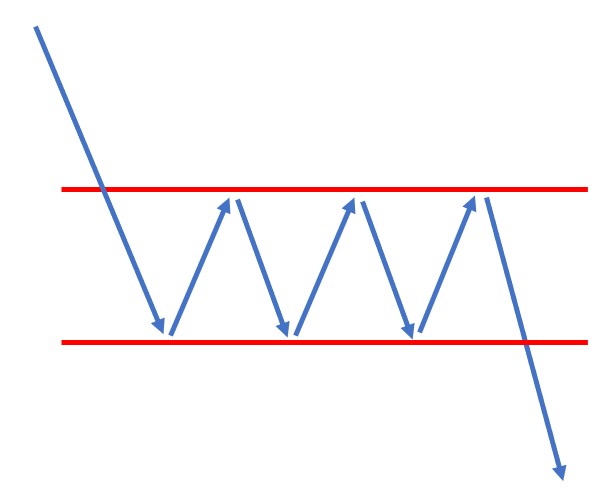 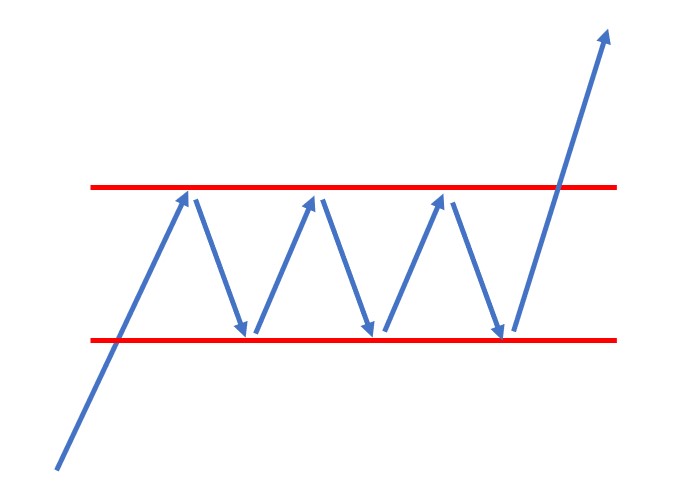 A bullish rectangle appears following an uptrend. If you spot this pattern, you can expect the price to continue going up. 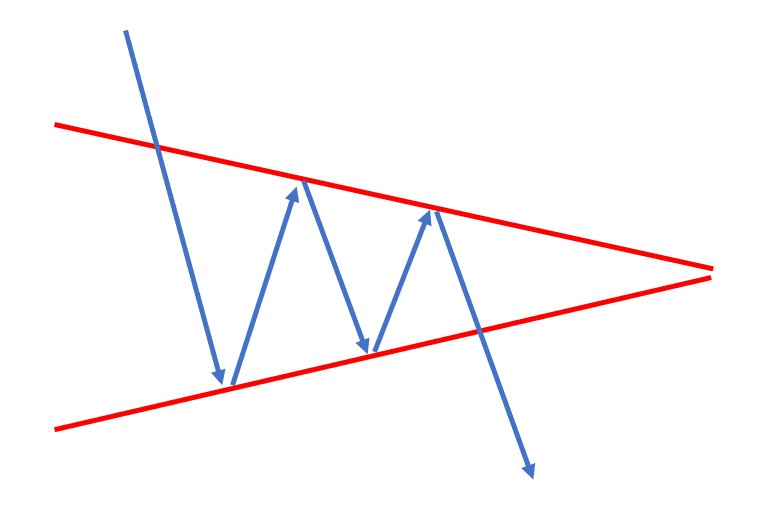 Following a significant upward or downward move in price, there is usually a short pause before further movement in the same direction. As a result, the price tends to consolidate. In a forex chart, this can be identified by a small symmetrical triangle shape called a pennant.

Bearish pennants form during vertical, steep downturns. Following a sudden drop in price, some traders will choose to close their positions whereas others opt to join the trend, meaning that the price consolidates for a short time.

Once enough sellers have moved into the trade, the price drops below the bottom point of the pennant and it can be expected to continue moving down. 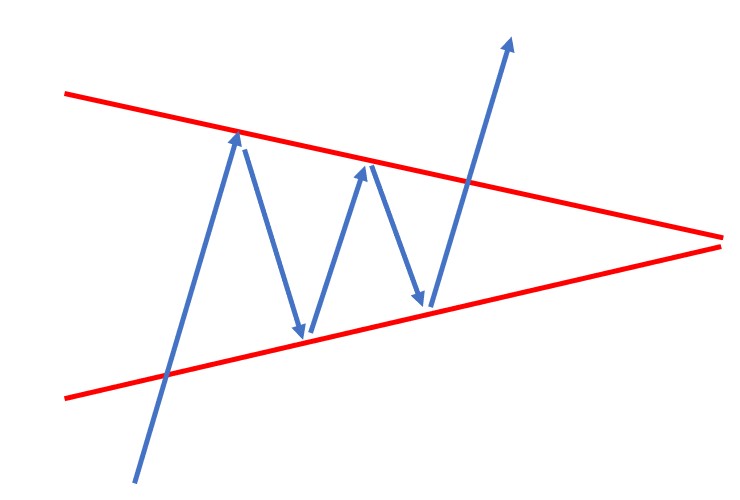 Bullish pennant patterns are the opposite of bearish ones, so they appear after a sharp increase in price. This uptrend can be expected to continue after a brief period of consolidation. 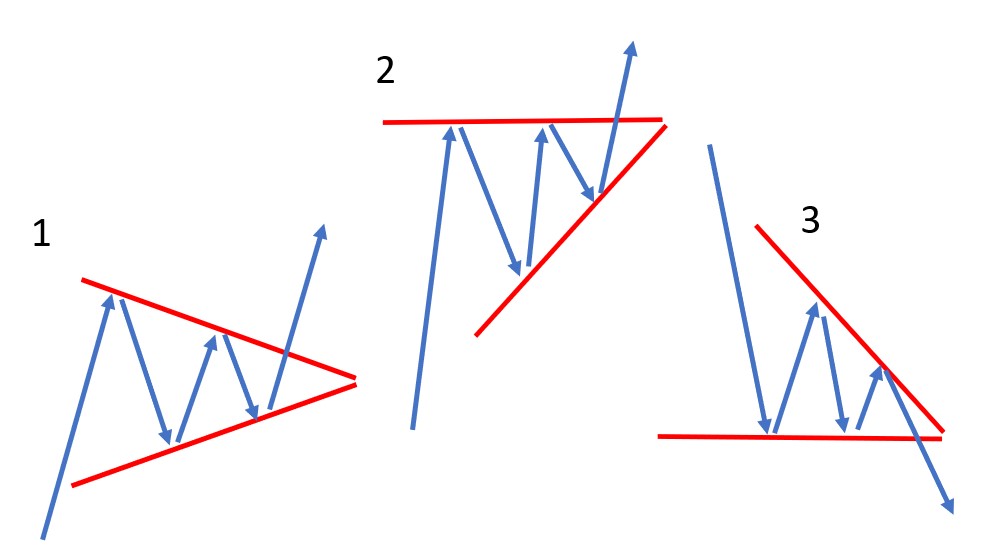 When a triangle pattern appears, it can be more difficult to predict what will happen next. There are three different types of triangle chart formation to look out for:

Chart patterns are a useful tool when it comes to making predictions about the markets and highlighting areas which are potentially beneficial for trading.

While chart patterns can be useful in providing an insight as to what the markets are doing, they shouldn’t be used by themselves. Ideally, they should be considered alongside other data to help build strategies and make trading decisions.

Chart patterns and price action patterns are more useful in stocks and futures markets than in Forex markets. This doesn’t mean that they aren’t helpful for making Forex decisions, however, they should just be considered alongside other information.

Candlestick charts are particularly useful as they help to highlight changes within specific periods. This is useful for forex trades which often take place over a period of time.

Many brokers will offer educational tools as part of their packages which will enable you to learn about things like reading charts and patterns.

Alternatively, there are several courses and training programs to consider.

They offer an insight into gradual changes within markets which can’t always be seen immediately. This information can help to influence decisions regarding how and when to make trades.

Support and resistance help brokers to see potential highs and lows within the market as well as offer the ability to see where they are likely to sit within these trends.

This is a pattern that often happens at the top of a market and can often signal a reversal. It is a relatively rare pattern to see in charts and is similar to the more common head and shoulders pattern.

For any new trader, forex charts are likely to seem overwhelming when you first start looking at them. One of the best things you can do is set aside some time to gain a good understanding of how the price and time axis can be used to help gather historical data and learn how this can be used to predict what might happen next.

Many trading platforms offer the option to open a demo account which will allow you to trade risk-free before putting any of your money at risk. This is a good way to boost your overall trading knowledge and give yourself time to become familiar with forex charts, interpret patterns and act upon any trends that you identify.

What Are the Benefits of Forex Trading?

What Are Forex Trading Robots & Do They Actually Work?

Signs You Are Ready to Live Trade