The Cognitive Abilities Test (or CAT4) is taken by students across the UK and Ireland between the ages of 6 and 17+.

Whilst not all schools use this test, over 50% of UK secondary schools do.

The test is designed to work out how each student best learns and thinks, allowing teachers and staff to support them better.

The CAT4 is similar to an IQ test for adults and gives a baseline for the potential and strengths of each student whilst highlighting any weaknesses they might have.

With this information, teachers can structure their lessons to suit different learning types.

For example, some students absorb information better via pictures, video and infographics, whereas others may prefer words and audio.

This article will give parents a better understanding of the CAT4, what areas will be tested and what the results will show.

What Is the CAT4?

The CAT4 has been developed by GL Assessment, with this fourth edition being five years in the making, using over 25,000 students’ data.

The test is used for a few different purposes:

Whilst it tends to be sat by secondary school pupils, the test can be taken as young as six and up to the age of 17 and above.

With various ages sitting the test, there are seven levels of difficulty:

CAT4 levels X to C can be good indicators of progress and pace of learning at a younger age.

This will highlight any strengths and weaknesses early on.

Many pupils also sit this in Key Stage 3, often as part of an entrance exam to some schools or as part of the move to secondary school.

This can provide them with support in the transition between primary and secondary education.

When taken by the older year groups, the CAT4 can be a guide to the subjects a child should study for GCSEs, A-Levels and at university, as well as future career paths.

This test is used for children aged between 7.5 and 10 years old and is usually administered in Year 4 in England, or Primary 5 in Scotland.

There are four types of questions, separated into three parts in this assessment, and each part needs to be completed before moving on to the next. Question types are the same throughout levels A-G.

Part One is 20 minutes long and consists of figure classification and figure matrices, with 24 questions to be answered in 10 minutes for each.

Part Two is 26 minutes long, in three sections: verbal classification and verbal analogies, with 24 questions in 8 minutes each, and then number analogies which have 18 questions that need to be answered in 10 minutes.

For children in Year 7 (or Secondary 1 in Scotland), the Level D CAT4 is used. With the same structure as tests for Level A-G, there are four types of questions separated into three parts, with each part taking between 20 and 26 minutes to complete. As the levels progress, the difficulty increases to match the age of the child taking the assessment.

Part One has figure classification and figure matrices, with 48 questions in total and taking 20 minutes to complete.

In Part Two, there are three types of question – verbal classification and verbal analogies, both with 24 questions that need to be answered in eight minutes. This is followed by number analogies, which has 18 questions and a 10-minute time limit.

Aimed at students aged between 11.5 and 14, the CAT4 Level E is usually administered in Year 8 (Secondary 2 in Scotland).

Part One has a 20-minute time limit and 48 questions, spilt equally between figure classification and figure matrices.

Part Two covers both verbal reasoning and part of the quantitative reasoning questions, with 24 questions in eight minutes each for verbal classification and verbal analogies, and then 10 minutes to answer 18 questions on number analogies.

Part Three is the second half of quantitative reasoning questions (18 questions in eight minutes on number series) and the spatial ability battery, which consists of figure analysis and figure recognition, both having 18 questions that need to be answered in nine minutes.

For students in Year 11+ or Secondary 5+6 in Scotland, the Level G assessment is designed to challenge students as they prepare or leave the secondary education system and choose their further education focus.

Like the earlier tests, the assessment is split into three distinct parts and lasts a total of 78 minutes, although breaks can be taken between parts. Part One consists of non-verbal reasoning questions, with figure classification and figure matrices, with a total time of 20 minutes and 48 questions.

Part Two has three types of question. The first two are related to verbal reasoning, with verbal classification and verbal analogies having 24 questions each to be answered in a total of 16 minutes. The last section is number analogies, and students have 10 minutes to answer 18 questions.

Part Three begins with 18 number series questions to be answered in eight minutes, and then two sets of questions on spatial ability (figure analysis and figure recognition), lasting 18 minutes in total with 36 questions split equally in that time.

If you want 12 month access to all the practice resources for this test, our partner TestPrep-Online.com offers a Family Membership.

Family Membership gives you access to all the TestPrep-Online resources for the next 12 months. You will also get two separate accounts, which can be very helpful if you have two children preparing for their tests.

What Is Being Assessed?

The CAT4 aims to cover all subject areas, with many overlapping into multiple batteries. 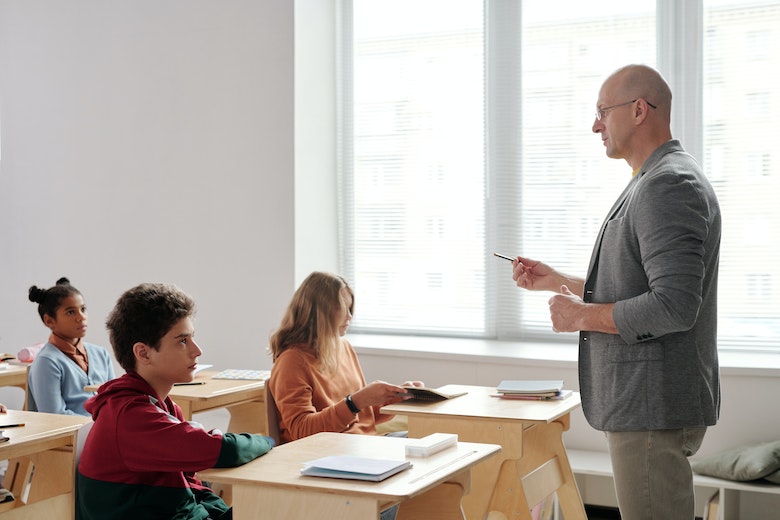 Each of the four batteries of verbal, non-verbal, quantitative and spatial reasoning are broken down into smaller subsections.

Here’s a breakdown of what to expect on each test and what skills are required:

Identify the next shape in the sequence: 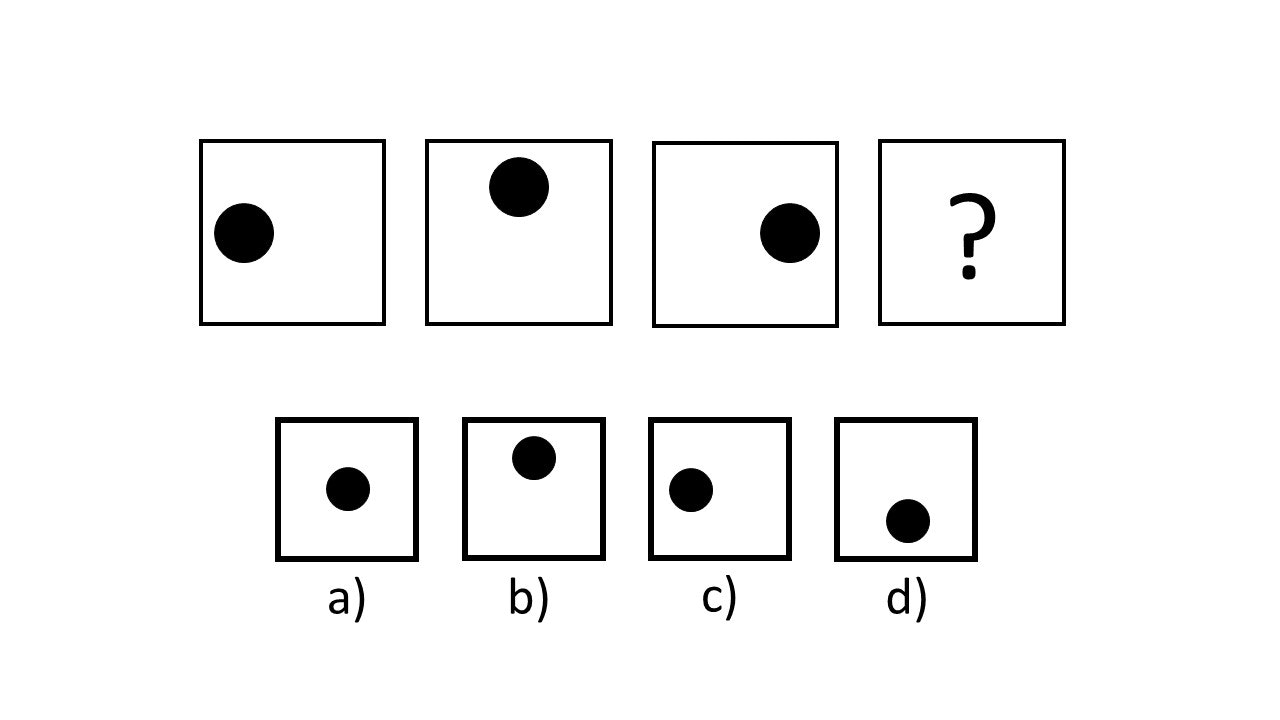 Which answer option completes the pattern? 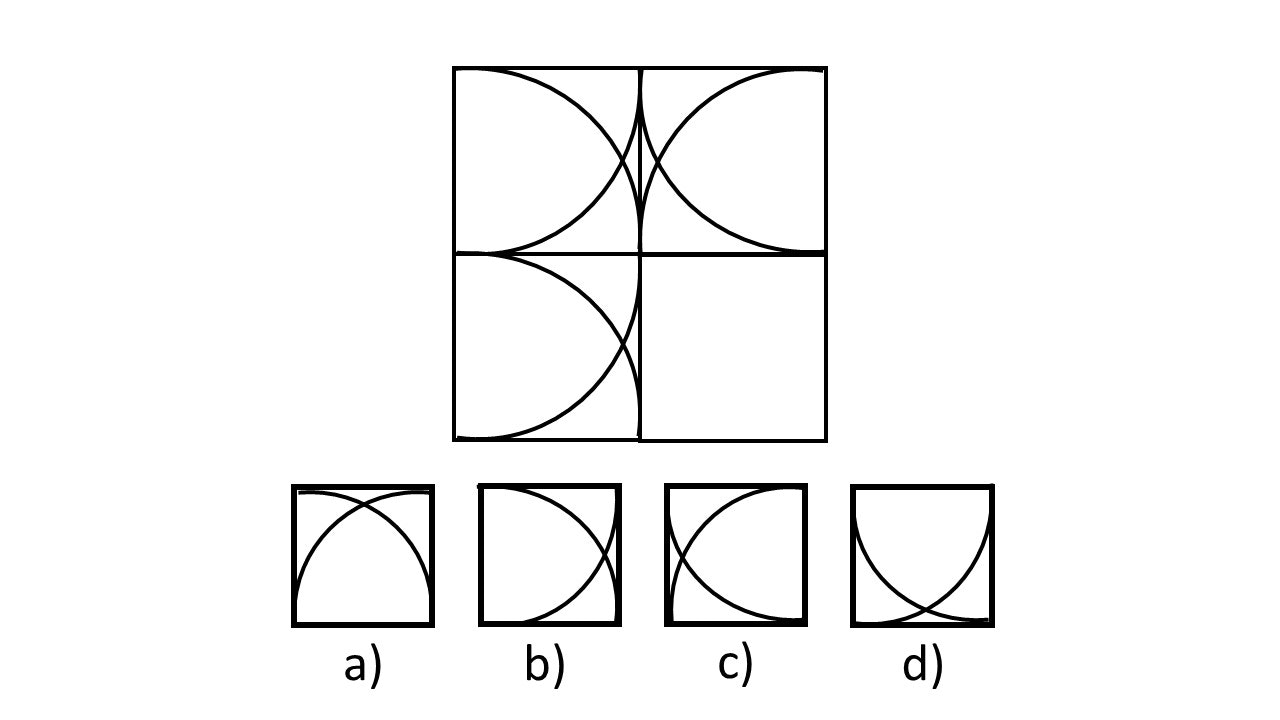 Which word completes the pattern?

A piece of A4 paper is folded in half and a hole is punched in it. What will the paper look like when unfolded? 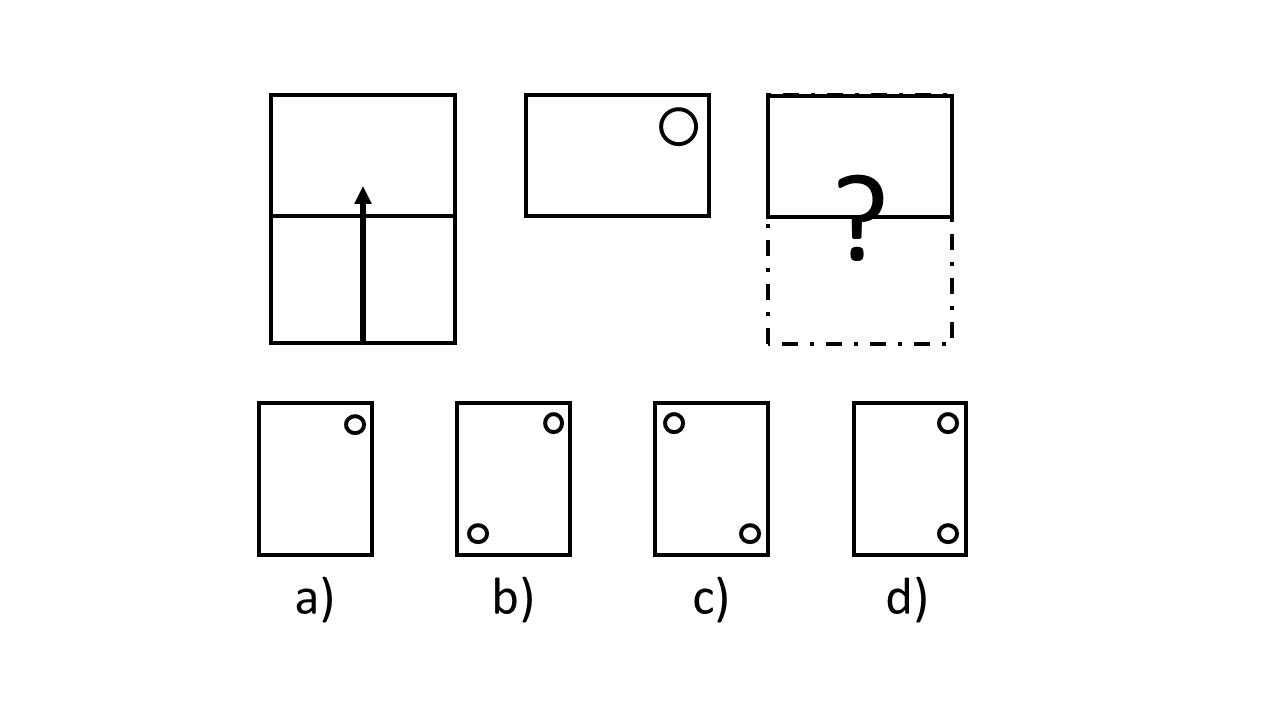 Find the hidden shape in the answer options below: 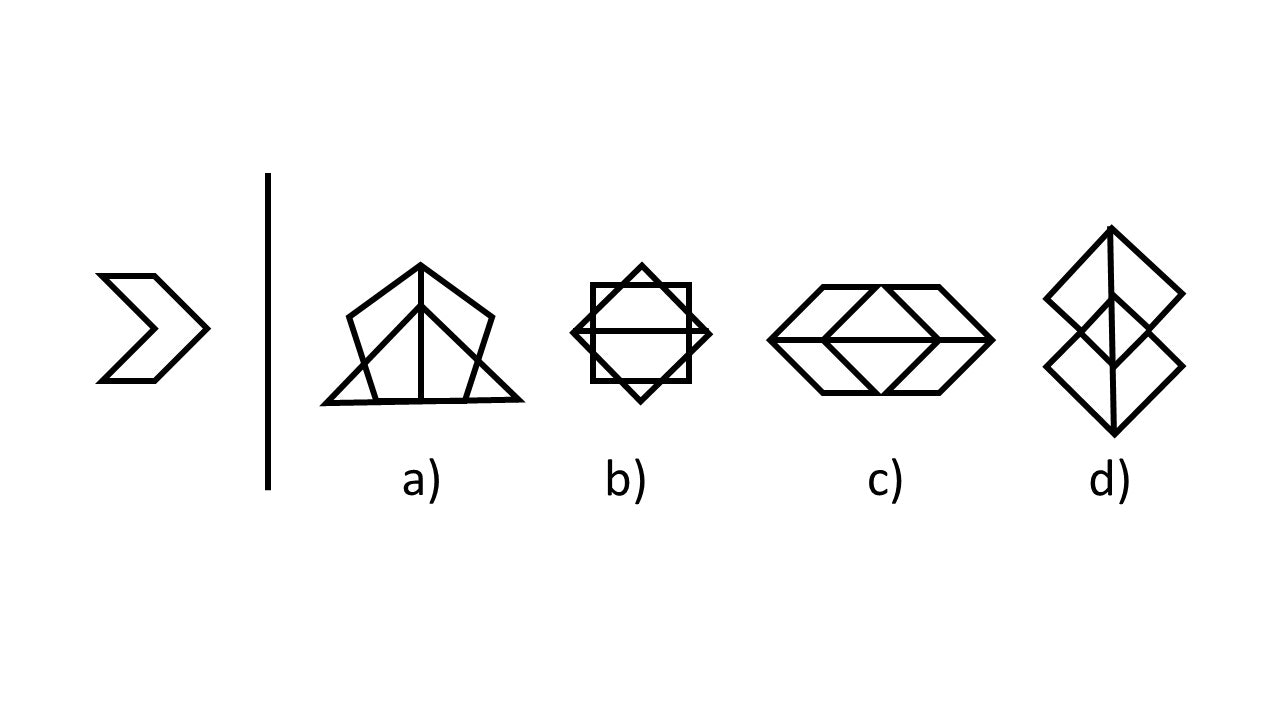 The correct answers are:

What to Expect When Taking the CAT4

As seen above, the CAT4 is broken into three parts. Each part consists of multiple-choice questions and must be completed in 45 minutes; in total, two hours and 15 minutes.

Students are required to complete all questions in this time; however, some students, such as those with SEN, may be given extra time to finish.

The test can be sat both online and on paper, with many schools now preferring students to sit the online version.

Regardless of the format, the tests have the same scoring and results reports sent out.

How the Test Is Scored

Each student will receive a raw score out of 130; this is the number of questions they have answered correctly.

These figures are then calculated into three different normative scores to give an overall picture.

These three normative scores are:

The CAT4 is not a knowledge-based test; it requires logic and reasoning.

The test-makers advise against taking practice tests as practice beforehand could result in inaccurate results.

The questions test how each student’s brain responds to different areas, such as words, numbers and shapes.

Some of the questions will be recognisable to the child as they will be similar to those they have seen in previous academic exams. However, some cover multiple subjects and wouldn’t fit into a curriculum-based exam.

By practising these types of questions, the child will be more aware of how to answer and may score highly in a section that they would normally struggle with, such as number patterns and sequences.

Ultimately, the best advice for parents is to encourage your child to relax.

This is not like a regular exam; it is not designed to test their knowledge on any subject. The idea is to get an overview of which areas of learning they excel in and which areas they need a helping hand with.

Each student will get a comprehensive report sent back to the school and you should be offered the opportunity to discuss them with a teacher. Many schools will enlist the help of parents to pick a suitable learning schedule for the student.

The CAT4 cognitive abilities test assesses verbal, non-verbal, quantitative and spatial reasoning. This multiple-choice test takes around two hours to complete. This test is usually taken by secondary school pupils, but it can be taken by anyone aged six or over. The test has seven levels of difficulty, with Level X taken by 6 to 7-year-olds and Level G taken by 15 to 17+ year-olds.

A person’s CAT4 results provide an overview of their learning potential. This can be used by education staff to identify students who may need additional support, as well as students who will need to be challenged to reach their full potential.

Many teachers use CAT4 results to categorize students, grouping students with similar abilities and learning preferences together.

The CAT4 is not marketed as being an IQ test, however it has some similarities to IQ tests for adults. Your CAT4 results provide a baseline for your overall potential and strengths, as well as helping to highlight any areas of weakness.

The average CAT4 score is 100. When taking the test, your results will include a Standard Age Score (SAS). This score is based on your raw score (the number of questions answered correctly) and adjusted according to your age. It is placed on a scale that is designed to draw comparisons with a sample of other students in your age group.

Compared to other tests your child will sit in their academic career, the CAT4 is the least intimidating.

Whilst they might not know what to expect from the test itself, the fact that there is no revision required could relieve some of that pressure.

A child may show promise in a certain area of the test, which can be used to help them develop their learning skills.

There may also be an area that they are struggling with or do not feel as confident in. Teachers will then be able to use this knowledge to guide their learning.

The CAT4 is a tool for students, teachers and parents alike to see where the child is currently at and where they can be. Learning can be tailored towards these results and all three parties involved can work together to ensure the child feels as supported and challenged as they need to be. 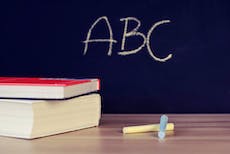 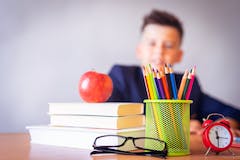