Price action trading uses movement in the price of forex, stocks, bonds or any other tradable security as a strategy to make a profit.

In some ways, trading concerns price action; finding the appropriate time to buy or sell depending on the movement of price.

However, the specific strategy of price action trading means discovering order throughout the random movement of an asset price. Price movement plotted over time forms the basis for almost all technical analysis.

The movement of price can form patterns.

These decisions tend to be subjective, and traders will not repeat the same decisions even when presented with identical data.

Price action trading is often used by retail traders, speculators, arbitragers and trading firms by using technical analysis tools to monitor the up and down movement of a security’s price.

For short to medium-term limited profit trades, price action trading is a popular option. Long-term traders use other strategies for profit.

Finding a strategic way to comprehend the seemingly random movement of prices is important.

For those that use a price action trading strategy, the combination of technical analysis tools and recent price history that helps to identify trade opportunities based on the trader’s interpretations has some great advantages.

For traders, self-defined strategies offer flexibility and ease of application. Price action trading can be used with trading portals as well as software and applications to be used by novice and experienced traders.

Price action trading is closest to floor trading in the exchanges than any other strategy.

Price action trading is easy to test in a demo account or through backtesting on past data. It is time-tested to be usable in any market condition.

It is also a clearly defined strategy with no grey areas; the conditions are either there or not there – there is no ambiguity. This reaction to price changes maintains an objective market mindset and encourages the discipline needed to make good decisions.

Price action trading relies on volatility in the market to make a profit. If the prices do not change, then there are no profits to be made.

In a volatile market, prices can alter fast in a short period, and to profit, you need to know which side of the trade to be on.

Prices on shares, bonds, commodities, forex and other tradable assets can change depending on news from political and economic sources.

When volatility is created through the news, almost all markets can be affected, both positively and negatively.

Markets are not immune to rumors, and when messages are passed, they can impact prices.

A notion as simple as an idea that a country is losing trade deals, for example, could cause the value of their currency to plunge.

Rumors of this happening might encourage prices to drop as a result of more people selling.

Driven by a Universal Conclusion

If many traders recognize a pattern coming through on recent prices, then the self-fulfilling prophecy of their actions could create volatility in the market.

Many traders employing the same buying or selling moves can drive the price up (or down).

Aside from political and economic news and rumors, markets can be affected by adverse events, such as natural disasters.

The value of stock invariably goes down, and other more long-term financial effects make the market more volatile.

The Four Pillars of Price Action

Identifying price action to trade means understanding the ‘pillars’ that make up the technical analysis tools that are used to identify trade opportunities.

There are certain parts of a graph that might seem complicated; however, when fully understood, they can be used to demonstrate how the market is performing.

Candlesticks are the most popular form of charting. 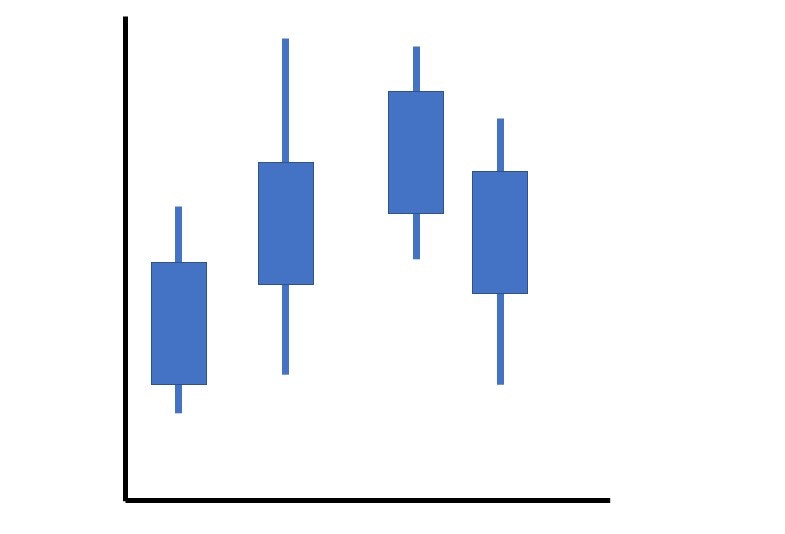 As an image, the candlestick is a thick bar with a ‘wick’ at either end. The top and bottom of the thick bar represent the opening and closing price for the day.

In most charts, they are black (or red) for closing lower than the opening; and white (or green) if they closed higher than they opened.

Each candle relays important information, but more data can be gathered when they are grouped and read over some time.

In general, most markets are flat. There are no significant movements in price, even during volatile times.

A bullish trend in the market can be identified by a grouping of candles that extend up and to the right.

This means that the prices are rising, closing higher daily. To be a true bullish trend, any reversal of the trend is not below the original high.

The opposite of a bullish trend, a bearish trend is a grouping of candles heading downwards.

Bearish trends are not generally good news for retail traders unless their strategy includes short-selling assets.

There are a few patterns that price action traders look for when deciding when to make a trade. These develop over a period of days.

A bullish engulfing pattern is a downturn reversal which is more than just a bullish trend.

What makes this a good pattern is that the white candlestick has a small or non-existent upper wick. The price closed at or near the highest price for the day, therefore, so the price is likely to continue moving upwards.

The bullish engulfing pattern is one that analysts tend to take notice of because it indicates a good time to buy, representing a change in sentiment for that commodity.

Bearish engulfing patterns demonstrate that the sellers are overtaking the buyers and represent a reversal of an uptrend. Prices are being pushed down, and this is a good shorting opportunity if that is a strategy used by traders.

In regards to bullish and bearish engulfing patterns, clean movement beforehand is useful for decision making.

The rising wedge pattern is sometimes known as an ascending wedge. This pattern is ascertained when a bullish trend is occurring.

When lines are drawn from the lowest price and the highest price, they will converge at some point and create an ascending wedge shape.

The pattern will usually take between 10 to 50 periods to develop and are useful indicators that there might be a reversal in the market, a bearish reversal in the case of a rising wedge.

To spot a rising wedge, identify converging trend lines combined with a pattern of declining volume which is likely to lead to a breakout from one trend line.

A falling wedge pattern is the opposite. This means a bearish trend is occurring and the convergence of trend lines form a descending wedge. This can be a reliable indicator that a bullish reversal is about to happen.

According to traders, the wedge patterns often break in the opposite direction of the trend lines.

If the wedge is rising, make bearish trades. If it is falling, it is a good time to make bullish trades.

Studies show that the wedge is an indicator of a breakout reversal about two thirds of the time; however, the falling wedge might be more reliable than the rising.

This has a baseline where the two outside peaks are similar in height, while the middle peak is the highest and predicts a bullish-to-bearish trend reversal.

The structure of the head and shoulders pattern is a short change in prices that is considered a tremendously reliable trend reversal pattern.

This is a trading signal that can demonstrate a bullish period is coming to an end, and a bearish trade is about to take over.

Any move past the neckline is enough to suggest that a reversal might be underway. Therefore, making trades once the price rises above the resistance of the neckline is the best action.

It is a short to medium-term trading strategy that relies on volatility to make trades and involves the trader being able to ‘read the market’ to make the best decisions.

The technical analysis needed to create graphs and plot movements of prices can be used to decide on when to trade and whether to buy or sell. This is thanks to the recognition of certain patterns that could indicate a reversal in the current market trend, whether that be bullish, bearish or flat.

In a bull market, buying is driving the prices up. In a bear market, selling is driving prices down. In a flat market, there is little movement or volatility and therefore, it is harder to trade for profit.

To be successful at price action trading, discover order in what appears to be random movements of the reduction in the asset to understand what can cause market volatility and be prepared for that.

Whether there is economic or political news, rumors or even a natural disaster, a volatile market makes higher value trading possible.

Price action trading is a popular strategy for many traders because it is simple to backtest and has been a reliable strategy over time.

The Best Ways to Learn More About Forex Trading