What Is Interpersonal Conflict?

Interpersonal conflict is defined as any conflict or disagreement involving two or more people.

Although unpleasant at times, interpersonal conflict is normal. It is usually the result of differing personalities clashing with alternative viewpoints.

No two people are the same and everyone will see a situation slightly differently. It is only to be expected that conflicts occasionally occur.

Conflict isn't always a negative thing. Sometimes, it can be a useful opportunity for growth and personal learning. At times, conflict can help us to understand a situation in a different way that helps to find a resolution.

In any conflict situation, it is important to know how to deal with it in a way that respects the other person and allows you to feel that your opinions and feelings are also valid.

How Does Interpersonal Conflict Arise?

Typically, interpersonal conflict happens when two or more people have differences of opinion. There are many reasons why this could happen in the workplace.

For example, there could be a situation where different team members have their own ideas as to how a project should be approached. They may also have different work ethics and approach tasks in different ways.

When this happens, a personality clash may occur, potentially resulting in a conflict situation.

Conflict could also occur if an employee feels as though they are consistently being assigned the hardest or most unpleasant tasks, while others have fewer responsibilities. This can lead to resentment and feelings of being unappreciated.

Conflicts can also happen because of a breakdown in communication, when one individual feels as though they aren’t valued or listened to. These issues can lead to negative emotions which, when left unchecked, will build into a conflict situation.

What Forms Can Interpersonal Conflict Take?

A pseudo conflict is a situation that isn’t really a conflict, even though it seems like one.

This usually happens due to a misunderstanding or miscommunication. It could be that someone hasn’t fully understood what is being asked of them or perhaps has missed an email containing valuable information about a project.

Whatever causes the situation, a pseudo conflict is one of the most easily resolved forms of conflicts. Often, it is just a case of individuals clarifying what they meant or what they are hoping to achieve.

Usually this will help both parties to see that their goals are aligned and solve any issues.

As the name would suggest, ego conflicts are related to personalities.

We all have different personalities and sometimes they clash.

Often an ego conflict will occur between two individuals who believe that their opinion is the right one, and anybody with an alternative viewpoint is automatically wrong.

This can occur in a number of different circumstances. For example, there could be disagreements about how to approach a project or the best way of managing a customer.

It can sometimes be difficult to resolve a conflict caused by ego, as neither party will want to back down. Their opinion will be swayed by their own belief that they are correct, and it will take a concerted effort for them to listen to the other person’s opinion.

However, if both parties can try to listen to and understand one another, a way to resolve the conflict can usually be found.

Within the workplace, it is relatively common to have policy conflicts. This can happen for a variety of reasons, such as when members of staff have interpreted something differently.

It can also happen when a team of individuals are put together to solve a problem or reach a target. They may all have different areas of specialty and favour different approaches.

These differences can cause conflict when people feel that their idea is the best possible way forward.

One of the most common reasons that people enter into conflict with one another is differences in their values or ethics.

This occurs because what one person sees as important or a priority isn’t necessarily considered as such by someone else. It can also happen when two people have very different personal values that clash and cause strain in a relationship.

People involved in values or ethics conflicts often agree to disagree. They understand the other person has a different viewpoint or set of values to them, but are not prepared to change their own stance. It is more about respecting someone's right to have an alternative opinion.

It is incredibly rare for interpersonal conflicts to become physical. When this happens, it represents a complete failure of interpersonal skills.

This could be the fault of just one person or a culmination of issues. Either way, resolution of physical conflict will often require more input from individuals on the outside of the conflict.

It is never acceptable for one person to become physically aggressive with another. If this happens within your workplace, immediately escalate the issue by using the relevant channels.

How to Manage Interpersonal Conflict

There are many different strategies that can help resolve interpersonal conflicts. The exact strategies you use will largely depend on the reason for the conflict and the particular situation.

Sometimes, you will need to use just one strategy. Other situations will require a multi-strategy approach.

Remain Calm, No Matter What

There will be times when a situation will make you want to lose your temper and shout or scream. It is vital that you not give in to these feelings.

Remaining calm enables you to focus on the situation rather than letting your emotions take over. You are also more likely to be listened to by others. After all, how often do we really listen to the person who is shouting?

Making sure that you are calm may also help the other person stay calm. It can, therefore, lead to finding a resolution more quickly, as both parties are more able to think clearly.

Compromise is vital when it comes to conflict resolution.

It may not always be possible to give in completely to what someone wants, but it is important for them to feel that their concerns and emotions are valid and understood. This is why compromise can be a useful tool.

By finding a way to compromise in a conflict situation, you will find a path through the issue that keeps both parties happy. Allowances are made on both sides so that everyone feels listened to.

See the Situation From the Other Person’s Perspective

We don’t often fully understand why someone is upset about a situation unless we try to look at it from their perspective. What may seem like a minor issue to us could be a significant inconvenience to someone else. This can then trigger a conflict situation.

It could be that someone feels as though their workload is harder than that of their colleagues. Perhaps they feel their work goes unnoticed and unappreciated.

Taking the time to consider a situation from their perspective can help you to understand why they are reacting in a certain way. It can also help you to find a solution while keeping everyone satisfied.

Don’t just pretend to listen, or look as though you are listening. Actively listen to the other person.

It is possible that part of the conflict is due to something you have done and you may not realise the effect it has had on others. By actively listening, you can gain insight into the emotions of others and begin to understand their perspective.

The majority of conflict situations are concluded with a sense of forgiveness. Hurt feelings and misunderstandings are forgiven and individuals move on. By forgiving those who have upset you, you will put negative emotions behind you and move on to the next task or challenge with a fresh start.

Forgiveness can also be a strategic choice as it can make you look like ‘the bigger person’. This can result in increased respect from those around you, as they will see that you have been able to put a challenging situation behind you.

They will also see that you don’t let conflict affect your working relationships, so you are able to remain focused on what’s important to your career, even when things are difficult.

Of course, there will be situations where forgiveness isn’t possible. When someone has repeatedly created conflict with you or there has been a violent or aggressive situation, it may not be possible to forgive.

Use Statements Such as ‘I Think’ and ‘I Feel’

It is easy to underestimate how a situation has made someone feel. Using ‘I’ statements means there is no room for misunderstandings. You are being as clear as you possibly can regarding your feelings.

For example, if you are in a conflict where you feel as though your workload is too much, you could say something like, ‘I feel that this is an unfair amount of work for me to complete within the deadline.’

This tells the person you are speaking to exactly how you feel and what the issue is. There is no room for them to misunderstand what you are saying, and it clearly states your emotions.

Interpersonal conflict is common in every aspect of life. You are never going to get along with everyone all of the time.

Being aware of potential causes of conflicts can also help to reduce how frequently they occur. You will be more mindful of the things you say and how they can affect others.

The most important thing to remember is that there will always be a way of resolving a conflict. Whether you are able to discuss a problem through to the solution, require help from an outsider or simply agree to disagree, paths can be found through conflicts without the need for violence or aggression. 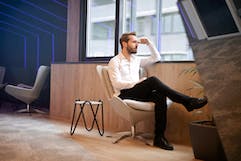 How to Answer the Interview Question: "What Would You Do if You Had a Personal Issue With Someone on Your Team?" 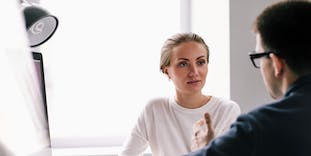 Interview Question: "How Would You Deal With a Difficult Co-worker?"