What Is a Hierarchical Structure?

Hierarchical structure is a term used to describe a form of chain of command within a company.

This particular form is the most common one found within businesses. When looked at as an image, it forms a pyramid-style diagram describing the authority within an organization.

When a hierarchical structure is used within a business, it will feature one person at the top in charge of the overall company. This is then followed by increasingly larger numbers of lower management and supervisors.

Typically, each section of a business will have a manager that they refer to. These managers will then have a manager or supervisor to report to. This carries on until the board members report to the CEO or company owner.

In a small company, this could mean one or two department managers who report to the owner. In a larger company, this can become a complex system of branch managers, area managers, division supervisors and so on.

At the bottom of the structure will be employees who have no distinct responsibilities of their own, but need to report to their superior or supervisor.

The chart below illustrates a simplified hierarchical format. It shows that the number of staff at each level decreases until eventually there is only one person at the top. 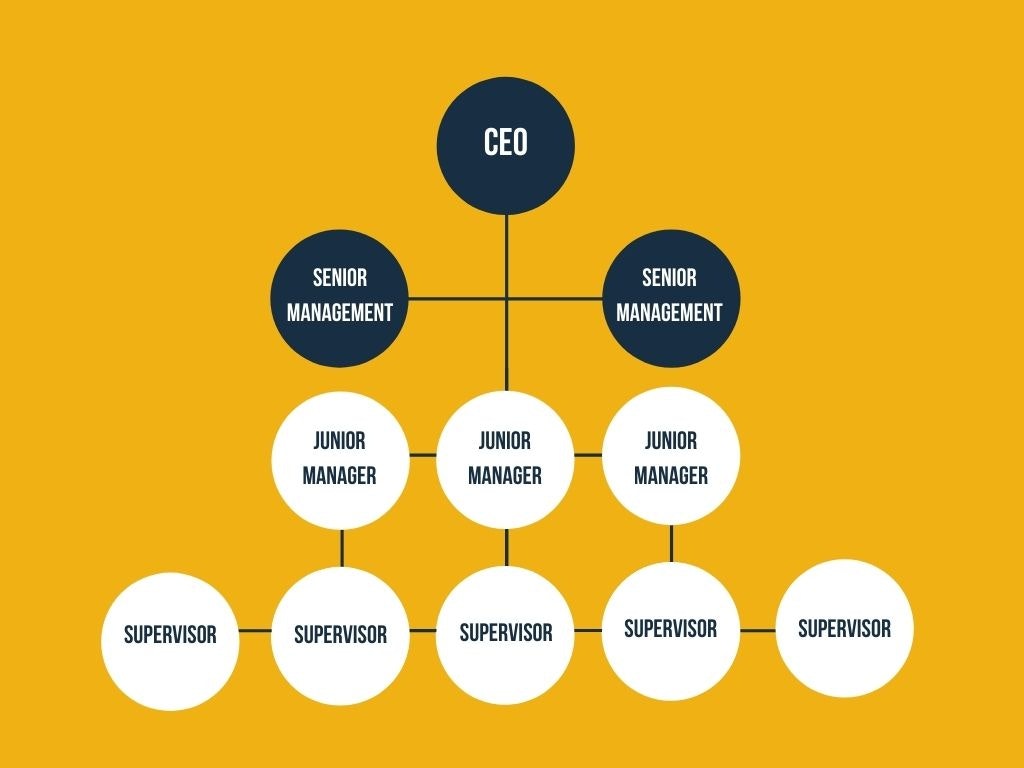 Companies that use hierarchical structures include:

Example of a Hierarchical Structure

We don’t just see hierarchical structures within the workplace. It may be easier to explain the system when looking at something that we see in everyday life.

A simple example of a hierarchical structure would be within a school setting.

Students are at the bottom of the system. They report to the teachers but have no direct responsibility for how the school is run.

The teachers are responsible for providing lessons to the students, but in turn would report to their department heads.

Each department head would be responsible for overseeing the progress of their subject and setting out how the curriculum should be tackled. They would report their progress and any issues to principals and deputy principals.

The principals are responsible for the whole school overall and maintain standards. They are answerable to the school board.

As a hierarchical structure is the most common form of management model found in companies, it is safe to assume that it has advantages. After all, if it didn’t work then companies would find an alternative.

Some of the advantages of using a hierarchical structure include:

A hierarchical structure means that there are different levels of control within the business, but everyone knows what their level of control is.

Those within the lowest ranks of the company will manage the day-to-day life of the business, customer experiences and staff performance.

Within a hierarchy, each person knows what their current position is, as well as the positions above and below them.

Many employees will benefit from this system, as it means that they know what they will need to do to move forward in their career. And they are aware of the position they will hold after promotion.

When you create specialized departments within a company that handle different things, such as finance, HR or bidding, you also create a more specialized workforce within these departments.

Having staff who are particularly skilled in their work means that departments are more efficient and less likely to make mistakes.

This style of structure gives a clear path for communicating , reporting information and raising issues.

Each person within the team knows who they should report to. This makes reporting and complaint handling much easier as everyone is aware of their roles, and there is usually just one designated person to handle this information.

When you work as part of a team, this fosters a sense of loyalty. Staff want their team to do well and be rewarded. These feelings of loyalty can help to improve staff performance and morale across departments.

Managers Who Can Deal With Relevant Issues

With each department or area having its own individual who is responsible for the smooth running of their section, it means that they are best placed to deal with any issues that occur.

A well-run organization will have managers who fully understand their own departments, meaning that problems can be solved quickly without needing to go through other departments. 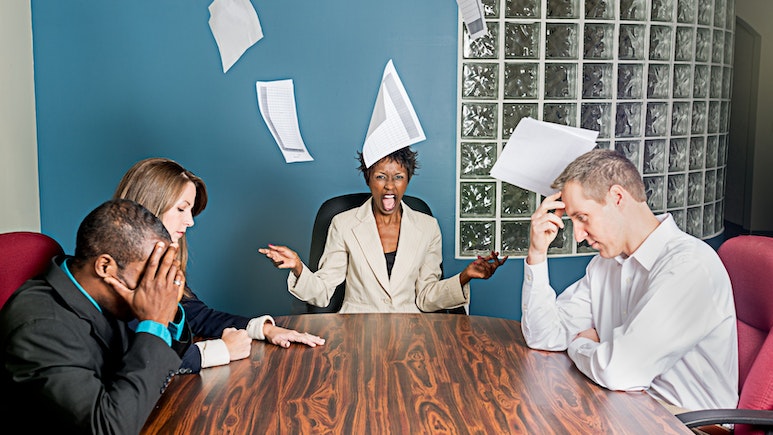 As with any structure of authority, nothing is ever perfect. There are disadvantages as well as advantages.

The potential disadvantages for a company choosing to use a hierarchical structure include:

Processes Can Be Slow

When you have a series of managers who need to deal with policies, complaints or reports, it can mean that responses are slow.

When a hierarchical structure is very large, it means having a lot of different departments, each with their own managers and supervisors. This can work out costly for a company in the long run, as they will have a larger number of people to employ and pay management wages to.

Rivalry Between Teams or Departments

While having a number of teams and departments can help to build a feeling of camaraderie, it can also lead to rivalry between different groups. This can be a disadvantage when it comes to teams needing to work together to achieve a common goal.

When multiple departments are needed in decision-making processes, this can lead to the potential for communications to break down if messages aren’t relayed or understood correctly.

With a large number of managers, it is difficult to have a consistent management style .

Each individual will want to bring their own skills and specialities to the role, and there is no guarantee that every single manager will be able to perform to the same level. This can create inconsistencies in performance, abilities and results.

Lack of Creativity at Lower Levels

Staff members at lower levels may feel that they have fewer opportunities to show off their own strengths and creativity.

This can happen if they feel that there are a lot of restrictions governing how they act within their role. When staff feel as though they are restricted, it can lead to feelings of being undervalued and unmotivated.

What Type of Employee Will Thrive Under a Hierarchical Structure?

Each employee is different, and not everybody will prosper in every business. There are, however, certain personality types that are more likely to succeed when working within a hierarchical structure.

Those with commanding personalities will often find that they do well in managerial roles because their authority is valued. They are able to motivate staff into getting the work done and achieving to the best of their ability.

People pleasers succeed in this system, as they are always keen to impress others around them, meaning that they work hard to achieve targets and goals.

This type of individual will often thrive in positions within a hierarchical system, as they are always keen to perform well and respond positively when they are recognized for their hard work.

These individuals are likely to work well at the lower levels of a hierarchical system, as there won’t be many demands on them to motivate themselves. They need others to help keep them motivated.

Like the commanding personalities, analytical people will often flourish in positions of authority. This is because they are able to accurately assess what needs doing, how it needs to be done and how improvements can be made.

Is There a Future for Hierarchical Structures?

Modern companies appear to be turning away from traditional hierarchical structures, with many opting to implement flat organizational structures.

Much of this is due to wanting to speed up decision-making processes and compete with other businesses within the same markets.

Smaller businesses and tech companies, in particular, have found that, by moving away from traditional chains of authority, they are able to compete more effectively within the modern world.

By having a more open approach to authority, they have discovered that staff members are able to problem solve and find solutions for themselves.

This means that staff members are able to play to their strengths and take more responsibility for their work. It also ultimately leads to more feelings of unity within a company.

The hierarchical structure is still the most common form of organizing authority within a very large company and is particularly popular with sectors such as retail, where business is spread across multiple locations.

It is unlikely that this will change in the short term, but some companies are now looking to find ways to reduce middle management levels. This is in order to allow more autonomy and creativity within lower levels.

In the future, while there will still probably be one overall person in charge as a founder or CEO, it is likely that more and more companies will adopt a slightly flatter approach. It will allow their staff members to have more say in the business they work for and enable them to grow their skills in all areas.

A hierarchical organizational structure is sometimes thought of as being old-fashioned and outdated.

However, when implemented correctly, it can be beneficial for companies who want to ensure that every department runs smoothly.

While smaller or more modern firms are looking to move away from this traditional chain of command, the benefits for large businesses or traditional companies should not be disregarded. Just because something is old doesn’t mean it doesn’t work.

Those who don’t thrive under authority or prefer more creativity in their working style may struggle.

But many employees will also find that they prefer working in a hierarchical structure, as they know exactly what is expected of them and how the company processes work.

The Functions of Management

What Is Chain of Command?