What Is Learning Curve Theory?

What Is Learning Curve Theory?

What Is a Learning Curve?

A learning curve is used to visualize where there has been the most gain over the shortest period.

The learning curve theory is a simple way of showing proficiency or profit generally over the course of time or money spent.

First used in 1885 by the psychologist Hermann Ebbinghaus, it is intended to highlight when we are at our most productive.

In today’s business world, the learning curve theory is used in marketing and investment. Companies use the graph regularly to track a range of data, including investment, growth, potential and proficiency.

A smooth curve shows exponential growth. Also known as a ‘gradual curve’, it does not show the same extremities as a steep curve.

In contrast, a steep curve denotes a definitive period when results are obtained quickly over a short period.

One way of understanding a steep curve is in relation to turning on a sauna. The heat will increase quickly at first, but eventually, it begins to level out once it has hit a certain temperature.

In this article, we will discuss how a learning curve model works and look at some examples.

We will also highlight how it can be used effectively by individuals and business analysts to determine the best working procedures.

How a Learning Curve Model Works and Examples

As on all graphs, the X-axis and Y-axis are interdependent. For learning curve models, they usually denote factors related to progress over a measurable investment.

The Y-axis represents progress. This can be the rate of learning, proficiency regarding an aptitude test, or something that indicates how much information a person can process.

In terms of business, progress is usually related to size or profitability.

For example, it could be related to the amount of stock, money made from an investment, or even something as simple as the percentage increase of profitability.

The X-axis denotes the variable against which progress is being measured. This usually involves time or size of investment.

When we apply the learning curve model to human growth and potential, we are more likely to measure this against how much time it takes. In contrast, a business may measure against either time or size of investment into a certain project or result.

Understanding what each axis represents can help businesses plot the graphs and work out the optimal point.

However, quantifying productivity results can be quite challenging, especially in a business environment. There is not a strict measure of productivity as there is with money or the size of stock held.

Some aspects tracked by businesses to measure productivity include:

A great way to find out these results and apply them to a learning curve model is by using aptitude and logic tests.

These types of tests can be kept simple, and they can be easily measured over time.

Various learning curve models can be used to model data. Four are discussed in this article, all of which can have a smooth/gradual or steep curve.

These are generally more smooth in their outcomes, so the shape of the curve is not as pronounced.

Analysis of gradual or smooth learning curves does not have to be exact, and there is generally a wider range of results to choose from to achieve a satisfactory outcome.

Let us take reading rates as an example.

On the Y-axis, concentration would be plotted as a measure of words read per minute. The X-axis would denote time spent reading.

Generally speaking, the concentration levels will start high on the Y-axis, and over time the line will decrease and plateau.

Depending on the subjects, concentration and words per minute will decrease at different points.

The results drawn from this example will highlight the general trend that individuals concentrate better between X amount of time, after which their concentration begins to decrease.

In contrast to the gradual learning curve, the steep one shows an exponential change in the curve.

A good example of this occurs in business and stocks. If we use the Y-axis to represent interest earned from stocks, and on the X-axis the money being invested, we may see a steep learning curve.

If little money is invested in stock, the interest remains low, even negligible.

However, at a certain point of investment, the interest will rocket, and the curve will shoot up.

In this case, the learning curve will look like a ramp or a near-vertical hill. Having this to hand helps businesses understand the threshold of their investments in certain stock quantities. 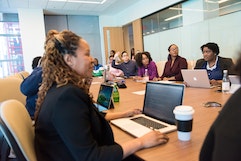 There are four types of learning curve models. Each can be either smooth or steep.

This curve starts with a decrease of the slope on the curve, eventually followed by a plateau. The concentration example can be applied to this curve.

This curve starts shallow and increases quickly at a certain point. The stock example can be applied to this curve.

In simple terms, the sigmoid curve takes the shape of an S, and models of learning are often applied to this.

The curve shows a typical learning cycle of slow growth during the initial 'beginner' stage, more confidence and engagment creating an increase and then a plateau stage where the learning is mastered.

There are varying shifts and changes in the complex learning curve. It usually begins with a smooth curve, before plateauing and ending with a smooth or a steep curve.

Understanding how to plot them and deduce the right determinate factors on the axis is only half the challenge with learning curve models.

Whether we use them as individuals or businesses, it is important to understand how to use them to the best effect.

When we use a learning curve model, there are certain things we must keep in mind.

Whether we are discussing a certain stock or a group of work colleagues, we must consider their individual characteristics.

Not every stock follows a binary law, and neither do humans. You will inevitably get results that might not sit well with a hypothesis you drew out before conducting the tests.

You may even get the inverse of what you expected because the subject matter may react differently to your initial expectations.

If you are working with humans, you must remember to keep the tests as ethical as possible. For example, do not make them complete arithmetic tests for 12 hours straight.

Be aware of how you can achieve satisfactory results within certain parameters.

There will be results that do not follow the general learning curve trend. It is important to keep these in mind, but don’t let them divert you from any general findings.

Anomalies appear in most quantitative examinations. Make note of them and attempt to assess why they happened.

Maybe it was due to a human error on your behalf. Maybe the subject in question has an exceptionally high IQ or a special talent. Whatever the reason, do not let it discourage you.

The learning curve aims to derive new basic theories to apply to a majority. With an anomaly, you must accept that whatever the circumstances and methodology, they may always stand out.

As with all tests, repeated trials provide more accurate answers. You cannot run a test once and use a learning curve theory from it to apply across the workplace.

Repetition is an essential element of assuring yourself of your theories and your conclusions. Try to create an environment where you can run a learning curve model frequently. More results mean more data.

On the other hand, don’t spend all your time and energy repeating the same tests. If you are unsure of the results, change the factors, alter your hypothesis, and even experiment with the subject matter.

Being creative and inquisitive is a great way to test your ideas further. If done correctly, there is no harm in testing the results you have already received by tweaking the parameters.

Now you have a learning curve in front of you, it’s time to think about what it means.

The best way of doing this is by attempting to explain the results to someone else. You can write a report on your findings and the steps you took during the experiment.

If this is not ideal because of time constraints, for example, try and explain the results to a colleague or manager. If you can successfully put your ideas across to them, you have done a good job.

Display your results clearly and be prepared for any questions that arise.

How you use the results you have received is arguably the most important part of a test.

Think about how you are going to apply the data to increase an aspect like work productivity. Armed with your newfound knowledge about the optimum working or concentration time, discuss with colleagues how you will put your ideas into practice.

If your results highlight the need for major changes in the workplace or extra investment, communicating this can be difficult.

Outlining how you intend to make the changes is the next step.

If you have successfully implemented the changes and have had satisfactory results, think of what this means for the future of your workplace.

Having carried out a solid experiment and reached conclusions means that you can be trusted to apply this elsewhere. Reflecting on your results is a good way of highlighting this.

In contrast, you may not have achieved the results you expected. This is a common occurrence, but don’t be discouraged. Making a few small changes to the axes or the process may produce a learning curve model you can work with.

Have confidence in your procedures and discuss with coworkers the learning curves you have received. They might have the answers you need to make it a success.

The learning curve model is a tried and tested method that has been applied across psychological fields and investment plans. Today, it proves to be exceptionally useful in identifying corporate working models and methods.

Applying the right learning curve model requires using the correct data and appropriate factors. Once you have these in place, it is vital to have clear intentions on what to do with the data.