What Is a Cost-of-Living Raise?

As inflation inevitably increases, so does the price of everything around you. Your house, your groceries and even the percentage of tax will all increase as inflation does.

This may at first sound worrying, but remember that your wage will also increase alongside inflation. This is known as the cost-of-living raise, or as it is more commonly known, cost-of-living adjustment (COLA).

A COLA is different from a raise or a bonus, as it is not an increase on your overall worth. A COLA is simply put in place to match the inflation that occurs in a national economy.

When you receive a bonus, you are being given better financial leverage in the society you operate within.

A COLA does not give you better financial leverage, as it is reflective of the changes of the economic situation.

If corporations did not choose to enact a COLA with its staff members, their wages would remain the same as the price of everything around them increases. In other words, their worth would be reduced.

The COLA was formally introduced during the 1970s during a period of high inflation. With the removal of the dollar from the gold standard in 1971, consumers could not redeem their dollars for their worth in gold.

As a result, the worth of the dollar’s value was internalized within the US, and any imports and trades with other countries contributed to the rate of inflation.

The COLA was introduced in order to automatically shift wages in accordance with inflation. This helped to preserve the living standards of individuals.

In this article, we will discuss what is needed to calculate a COLA, and why it is important for you, as a taxpayer and consumer, to take note of these changes. Further, we will outline the basics of these calculations so that you can keep on top of the changes to your benefits and wages.

What Is Included in a Cost-of-Living Calculation?

The best way to think of a COLA is as a percentage. Once you are able to do this, you can calculate what has changed in regard to your salary and the cost of living.

The percentage of your earnings that go toward the basics is included in a COLA. This does not include any luxuries you usually have access to through disposable income.

The essentials can be thought of as what you need to survive in a city or rural district. Food and groceries, rent and mortgage payments, and basic transportation costs are all considered essential.

Further, access to basic healthcare and some educational services are also included within this.

If you have children who need dental care and equipment for school, these will be included in a COLA.

As you move to different areas of the country, there will be adjustments to the overall costs of the essentials. This is why salaries are often higher in large urban areas where the populations are much higher.

In addition to this, tax that contributes to the sustainability of an infrastructure is also considered an essential living cost. In cities with more intricate infrastructures, the taxes will often be higher.

As prices of the basics fluctuate, a consumer price index (CPI) is used to measure what these costs will be for consumers.

The consumer price index indicates certain prices changes over time, for example, food and services. Once an average has been quantified from taking several CPIs, we can predict how much consumers need to spend generally in order to sustain themselves.

A CPI is often a precursor to the calculation of a COLA, as the COLA is based on the changes in prices of the essentials.

Keeping a note of all these statistical methods will help you understand what your earnings will need to be for you to keep afloat in any given infrastructure or society. 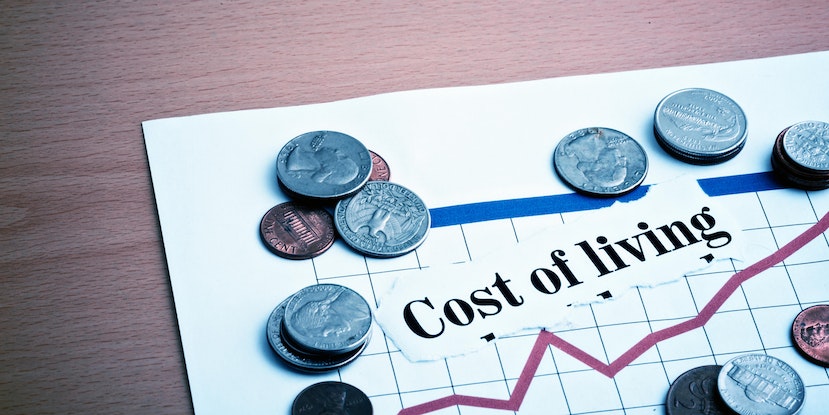 Ways to Calculate a Cost-of-Living Raise

There are different types of COLAs and each one allows employers and consumers to understand the impact of inflation in a different way.

Some companies like to use a quarterly review, while others optimize annual reviews. In each calculation, the percentage of inflation will determine the change in your overall earnings.

Inflation itself usually increases in small increments that range from 0.1% to 2%. Keeping this in mind can help you understand what the incremental changes will be to your salary.

In the case of hyperinflation, which is rare in stabilized economies, the inflation rates increase around 5% to 10% daily. These circumstances are often related to other crises such as war, food shortage and complete economic derailment.

Once obtaining the inflation rates, corporations will use this data alongside a CPI to determine what changes they need to make to your overall salary.

If this is done quarterly, and the CPIs show that there will be an increase of 1% in living costs, this will mean a 1% rise to your quarterly salary. If you earn $10,000 in one quarter, your salary will increase to $10,100 for the next quarter.

In the case of an annual increase of 1% in the CPI’s expected rise in consumer goods, then a corporation using this data will increase your annual salary by 1% to match that rise. For example, if you earn $40,000 in one year, with an increase of 1%, this will change to $40,400 in the next year.

The changes made to salaries are very small, but using CPIs keeps employers on top of what they need to alter in order to match inflation rates.

Some corporations choose to work straight from the current inflation rate and judge salaries according to the changes. CPIs are often very accurate and calculated monthly, but they are only measurements of a household’s purchasing power.

In this respect, they are generalized statistics, and they fluctuate quickly. Using overall inflation rates is common in calculating COLAs, as companies can apply their changes more broadly.

For instance, a company may have a workforce of 1,000 staff. If they were to use the CPIs, they would have to correlate all their wages with the small changes that are measured each month.

Instead, this company may find it easier to work annually from the increases of inflation calculated over the space of a year.

This will save the company time, and with the small changes that often occur in inflation, the changes can be applied quickly so that the company can keep on top of everything.

Not All Companies Use Cost-of-Living Adjustments

Companies going through any personnel changes may not want to use a COLA for its staff, as the time it takes to implement these salary alterations will not come into practice.

If staff are constantly leaving or you have a cohort of temporary staff, COLA calculations could be a waste of time.

Likewise, if you are not tied into a contract, then it is hard to calculate an annual wage and, therefore, hard to apply a COLA.

Some companies do not use COLAs at all. The reasons for this are varied and can relate to:

When Are Cost-of-Living Raises Appropriate?

As discussed above, CPIs can be taken monthly, and changes may be enacted upon these results as soon as the company deems fit.

Most COLAs are put into action in either a quarterly or annual fashion. The reasons for this are quite straightforward. Annual and quarterly COLAs allow companies to plan around their delivery.

If a company were to implement a COLA each month, it would cause extra paperwork and administrative duties. Companies want to keep COLAs simple.

Most living raises are discussed in annual reviews alongside an appraisal. As stated in the introduction, a raise or a bonus acts differently in that it is in accordance with an employee’s work ethic and not with inflation.

Once you discuss a COLA in an annual review, you will be made aware of the changes to the CPIs and the rates of inflation. Once this has been clarified, an employee will be given a percentage increase on their overall salary to match the increase in basic living costs.

Most corporations do outline their COLA process in their contracts, and if you would like to be made aware of this, it is completely acceptable to ask.

Working in the public sector also affects when you may receive a COLA. If there is a state declaration for companies to mandate a cost-of-living review, then you will receive a COLA.

If you work on a temporary contract or within the private sector, the chances of you receiving a COLA are less. However, you can strategize obtaining a COLA if you feel you are concerned about the increases in inflation.

Ask your employer about their COLA practices and if they take inflation into consideration with the wages they pay.

Depending on the answer you receive, it may be a good idea to outline the reasons why a COLA would be suitable for you. This may have to do with mortgage payments, rent, family allowance and the average price you spend on groceries per month.

The COLA was introduced 50 years ago, and it remains one of the more sensible economic strategies to deal with the fluctuations of inflation.

Today, the COLA is a staple of most corporations’ contractual obligations. With the incremental increases of inflation across the globe, companies have a system in place to deal with these seamlessly.

The COLA is a tool to help you deal with financial concerns. In this regard, it is not an increase in your salary, but an appropriation.

With this in mind, do not hesitate to ask your employers about their COLA policies. If you’re trying to obtain a COLA, rest assured that you are not asking for a higher salary outright.

COLA discussions take place quarterly or annually, and if you don't notice any changes to your salary, inquire if it was to do with your company’s COLA policies.

Obtaining a COLA has become part of the corporate workplace. It is your right as an employee to ask about it.

What Is a Good Work Ethic? 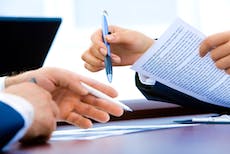 Things to Look for in an Employment Contract