What Is a Jung Personality Test?

A Jung personality test is often used to determine personality traits and behavioral tendencies as part of the screening process in job applications.

Increasingly, the idea of culture fit and desirable behaviors are being used alongside skills and aptitude testing to provide recruitment teams with more data points to create a candidate pool.

Carl Jung was born in 1875 and was a well-known and respected Swiss psychiatrist and psychoanalyst.

He worked with Sigmund Freud for a time with the aim of providing a joint vision of human psychology.

Jung is credited with many ideas that inform modern psychology today, including the idea of the self and the collective unconscious, but the theory that is perhaps most important in terms of learning and career applications is Jung’s personality theory.

Jung viewed the human personality as a series of opposite functions and attitudes that needed to be considered together to be useful.

This dichotomy between two different ways of interacting with the world in terms of sensing, thinking, feeling and intuition through the filter of outside or internal influences has become the basis for many personality tests – and some that you may have taken for fun online, or as part of a job application process.

There are some terms that are used in Jung’s personality theory that need some explanation in terms of their use in opposition.

The first part to understand is the relationship between extraversion and introversion.

Although it might seem a simple difference between loud, gregarious extroverts and quiet, shy introverts, that isn’t the case in Jungian theory.

Instead, this is described as the attitude a person has in relation to other personality functions.

Attitude works with function – and extraversion or introversion relates to the primary functions of thinking, feeling, intuition and sensing.

The primary function will describe how that person interacts with the world.

In the original Jung theory, there were only eight types of personality:

This is sometimes described as energy flow, and it is the filter that is applied to all the other functions.

For an extraverted person, the energy is received from the outside world, and extraverted people are more likely to have wider, objective focus and an attitude that is affected more by external factors.

Introverted people, on the other hand, are more likely to get energy from internal sources, using a subjective basis (like thoughts and experiences) as the attitude filter for their functions.

The focus of an introverted person is on their internal, mental world.

Thinking and feeling are often referred to as rational functions and relate to how we receive information.

Sensing and intuition are irrational functions, and they are related to how perceptive we are, and how we make sense of situations.

Intuitive people tend to perceive through facts and evidence, preferring to make decisions based on data and details.

Sensing people are more likely to perceive through feelings and concepts, with an abstract perceptive focus.

What Are Jung’s Eight Different Types?

The thinking function is based on structure, giving those who are on the thinking side of the scale more of a formulaic approach to problem-solving.

As logical people, thinkers tend to be more likely to make a decision based on data and facts rather than emotion.

Extraverted thinkers build their thinking based on outside sources like education, working well in leadership positions based on interaction with structured learning.

Introverted thinkers are more likely to use their internal fact-checker to solve problems and work best in solitary environments.

Feeling people are much more likely to make decisions based on feelings rather than facts and can sometimes be seen as sensitive because they look for alignment and harmony.

Feeling people are more likely to be interested in developing personal relationships, whether they are introverted or extraverted. 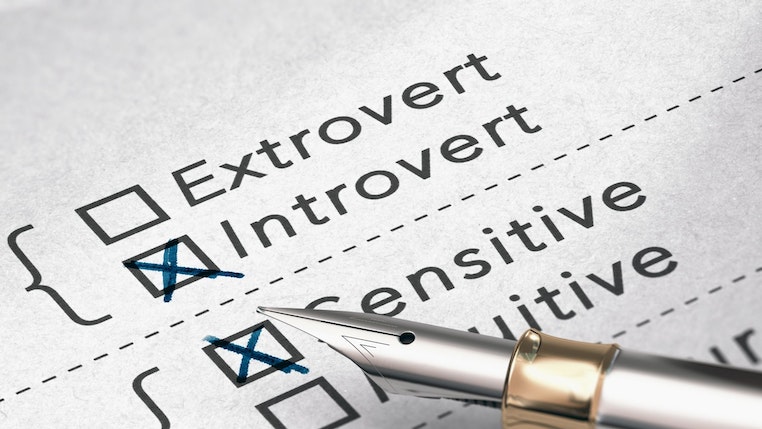 What Is a Jung Personality Test?

The extraverted feeling person is likely to be expressive with their emotions and values, seeking harmony in groups and accommodating all points of view.

The introverted feeling person is more likely to be seen as quiet and difficult to know, as they are less able to openly express those feelings from an internal perspective.

Sensing people can broadly be described as having common sense when it comes to perception. They value emotions and feelings but are more concerned with reality.

Sensing people prefer order and routine but can quickly adapt to change when necessary. They can be described as having an inner understanding without relying on tradition.

The extraverted sensing person prefers to perceive things with intense realism, in an objective and practical way.

Introverted sensing people also prefer reality but tend to see it through a subjective filter of their own lived experiences and mood. This means that they receive input from the outside world via their own internal world.

Intuition might seem harder to conceptualize as it is usually a part of the subconscious, but in this case, it can be considered as more of an expectant attitude.

Intuitive people tend to have short attention spans but can be inspirational and enthusiastic, preferring to work with abstract ideas and theories rather than facts.

Extraverted intuition has people always looking for the next thing. Change is welcomed and often sought out so that ideas and outcomes can be discussed and played with. Extraverted people are looking for the possibilities, the patterns and the meanings of things in the subjective world.

Introverted intuition has all the color and imagination, but on the inside. Dreamers who are often impulsive, those who are considered to have introverted intuition are constantly working through new and interesting scenarios just to see what might happen.

How Has Jung’s Personality Theory Been Adapted?

While the Jung personality test was never designed to be applied in the ways it has now – it was created specifically to categorize people for the purpose of psychotherapy – it has been modified and adapted in the last hundred years for different uses.

Personality tests based on the work of Jung are becoming more popular in employment scenarios.

Often found in screening tests for job applicants, they are also utilized to inform decisions about promotions and to discover training needs for current employees.

Understanding the personality traits and behavior of potential employees is important to not only ensure that they are suitable for the advertised role – introverted personalities might not excel well in a sales role, for example – but also to see how they will fit in corporate culture.

This is becoming increasingly important as a great company culture not only improves productivity but also attracts top talent.

Perhaps the most famous adaptation to the Jung personality theory is the work done by Myers-Briggs to create a 16-personality test, but there are many others.

The Myers-Briggs test added another two facets of personality to the Jung opposites: Judging and Perceiving:

Thanks to the additional research by Myers-Briggs, a Jung-type personality test will have one of 16 outcomes now, that consider all the dichotomies as separate entities – one or the other in each pair.

Thus, a Myers-Briggs type will be a four-letter acronym based on how you score in the test, such as EFNP or ISTJ.

Each personality type has a particular analysis, and this is where the psychological background of the test provider is important.

Although there are any number of free tests available online, the ‘proper’ tests are usually paid because they are the ones that provide the right information and reports.

How Can I Take a Jung Personality Test?

There are many different types of personality tests that you might come across when you are job hunting, and this is a great resource to find out about other ones that aren’t necessarily related to Jung.

A Jung personality test can be found on 123test.com and a free MBTI-type test that is popular is the 16Personalities test, which provides both free analysis and a paid option for a more in-depth look at what your personality type means.

Of course, the best place to get the full Jung personality test is using the Jung Type Indicator, available from the publisher Psytech, but this is aimed at larger-scale users.

The official Myers-Briggs Type Indicator (MBTI) instrument can be found online, and there are several qualified professionals who are certified to administer it too.

You can also practice personality tests with JobTestPrep.

Personality tests are common in employment, whether as part of the screening process, when applying for a promotion or being assessed for training needs.

Personality tests can also be useful for you to take as part of self-exploration, to help you understand your own motivations and learning styles.

Jungian personality theory has been the basis for many personality tests, and developments over the last hundred years or so have not changed the initial ideas much, merely added new facets.

There is some controversy as to the reliability of personality tests in general, with research demonstrating that the same person can take the same test just a few weeks apart and get a different result – and this means that any personality test should be taken as a guide rather than a definitive categorization.

Jung personality tests can give results that point to the way you learn, what motivates you, what careers you would be most suited to and how you interact with the world around you – all things that are important when it comes to finding a new role.

But this doesn’t have to pigeon-hole you.

Personality is a spectrum of traits and might be different for you from one day to the next.